Back Where I Always Belonged


This has been one of those "Bow your head grit your teeth and ride into the wind" deals for sure. I stepped out to make some big changes more than two years ago. Every time I got close or seemed to make significant progress__WHAP! I'd get smacked.

More than once I came close up to quittin the deal. But I didn't...

Things come apart and I figured late last winter that I'd lost her... the gelding, Cody Jack did get lost to me... and that still cuts.

When you keep even the tiniest spark of Hope alive, sometimes things will find a way to work out a little.

Somehow, just in the nick of time Cora found her way back to me just before thanksgiving... or I found my way back to her.

In the intervening year, she got a little tubby...  and she's winter shaggy...

I chose to have a guy I found restart her for me... she had some issues that had developed when she was gone. After all the ordeals...I had decided my head wasn't in the "right" place to do those things my self and be fair to her. I felt like she deserved a good and proper chance without all the fool jiggin' around everyone's been doin' with her. 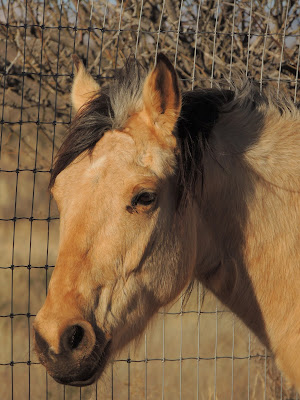 With her on the "diet" I put her on in November and a month under saddle with the fella I found that does things the way I would, she's calm again and willing... and some of that soggy belly is working itself off... 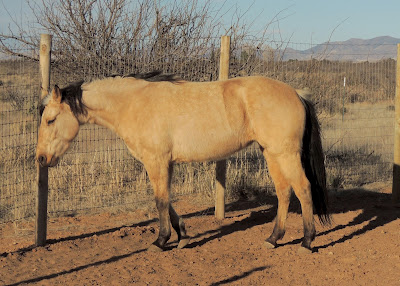 
I'm finally, after all the struggle and strife... Right back where I've always belonged.

There's quite a bit of work for me to do. I've got some little effort to make to get my feet, my hands and my head all going the same dang direction!

But if she'll give me a little slack to get my crap in one sack, and I put out the effort... It's looking bright! She's one of the better horses I've ever owned... and them that let her slide away from them, will learn I believe to regret their mistakes.

We've had a couple light rides... the weather isn't co-operating again. Into the second day of rain. It's times like this that I sometimes wish I was rich and had a nice big covered arena! :)

But there's no lack of work to do. I buttoned up the last chapter of my latest book; "For My Horses" a few days ago. The editing and book cover work is proceeding leading me to believe an early to mid March Publishing date is pretty doable.

It's not sunny in the desert but it's feeling pretty fair just now.

Email ThisBlogThis!Share to TwitterShare to FacebookShare to Pinterest
Labels: around the campfire, Horses, writing shed

They Make a Good Fit 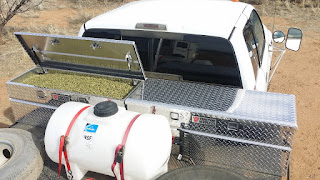 Filled one of the truck bins this morning for the first time. I thought I had it calculated pretty close - and I was right!
Four 80# sacks of Alfalfa pellets fit in a bin. That's 640# of feed on the truck... and another 480 or better in the trailer bins.
Which is pretty awesome. That means while I'm still with only Cora, between the two trailer bins and these two truck bins I'll have something better than two months of groceries for her - anywhere I go.
Checked up on Cora again this morning... She'll be coming home next week. Friday maybe. Going up to ride myself early in the week. I'll be glad to swing my own leg over the saddle on her...been a long time working to get here.
Makes me kinda nervous actually. Been pretty close before.
Just pull my hat down, suck in some wind and ride it out I guess.
Long way to go yet and obstacles showing up on the horizon... but one way or t'other... it'll get done.
-Brian
Posted by Brian at 1:36 PM 2 comments: