Anyone who has been around for a bit knows I live full-time in a Lakota Charger LQ.

I'm really liking the trailer, but with all things, you quickly find it's weaknesses.The first thing with these horse trailers is What they're designed for. Few if any are expected to be on the road much more than a weekend. 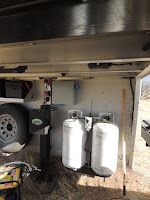 Really? I've been living in this'un every day since spring of '15... the very first flaw that got corrected was to replace the itty bitty propane 20# bottles that came on it...

With a pair of decent 40# jugs. That gives me plenty to feed the furnace on chilly winter, high desert nights.

The next thing that needs attention are the batteries. Listen here, so called "RV/Marine" labeled batteries ARE NOT Deep cycle batteries.
They're a hybrid thing that is part starting part house battery. They'll start an outboard ok... but they SUCK at keeping your lights on for any length of time.

Those (2) 12volt pretenders got replaced with a pair of less than the best (I was broke) 6 Volt, true deep cycle "golf cart" type batteries. That lets me get through a night of the furnace running without the batteries dying. A future project is to double the battery bank (in the current spare tire location) to FOUR batteries, and up-grade those from the current approx. 215 amp hours to T-145's which will yield 520 amp hours with the 4 batteries. 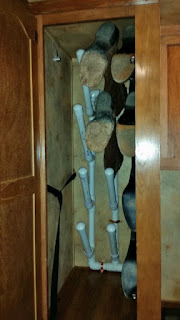 One of those clutters in a horse rig is BOOTS! I took the smallest, narrowest closet and built a pvc rack to keep a few pairs of boots ready to wear and out from under foot when they ain't on my feet.

I've been using that quite a while now and no issues.

Every pair is easy to get to or put back and no clutter. all those boot pegs are filled... I just left some out so you could see the structure.

Reworking of closets was actually a general project. There are a few full size cabinets in the quarters. Trouble with 'em is just that. They're taller.

To efficiently use the space I simply added a few intermediate shelves so I could use that space without piling things on top of each other.


Now, when they built the trailer, like a lot of the bigger LQ's they installed a side compartment on the road side. It's a pretty good space in there. Problem is it's hard to use. You put stuff in there and it generally ends up getting junk piled on top of junk and you can't get to what you want even if you remembered where you put it.

Then... I needed feed storage... and honestly... the expense and hassle of roof racks just doesn't capture my imagination... so I added bin dividers...

Several pieces of 2X lumber were siliconed in between the aluminum studs that form the compartment and support the mangers above.

Then I shaped up plywood to form the usable bins I wanted.

I'm a real believer in pelleted feed. They're easy to weigh so you know how much you're feeding. They are more digestible with greater feed conversion and virtually eliminate waste.

Plus, a few brands are certified weed free so I have no Forest Service or BLM hassles and I don't have to get up on the roof! That side compartment holds pretty much a months rations for one horse... and easy to get to.

I feed four times a day (A lot closer to the natural rhythm of a horses system) so this makes my chores as easy as they could ever be. My buckets just set on top of the bins.

After living in the rig for a year and a half I made a major change just a couple weeks back. A large and growing chunk of my living is produced from writing and publishing my western fiction. I've tried several different ways to arrange my "writing shed" to do that. A few evolutions of setting up different configurations of folding tables, story boards etc in the horse compartment (in camp) left me juuuuust a little dissatisfied.

I hated the hassle of setting it all up, breaking it all down... having to do that every time I moved or those times when I might have to move unexpectedly or get a horse to a vet... etc. So I kept thinkin' on it.

Just before Thanksgiving this year I pulled the trigger on an idea that had been percolating. 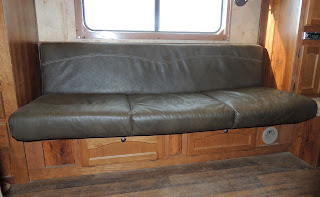 I live alone and have little need for a three cushion couch. A visitor that stayed over might be nice... buuut... it's pretty uncommon.

I needed a place to work much much more... So! Out came that Jacknife couch...

... and in went my Cowboy style writing shed! 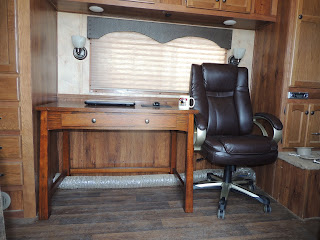 I found a used writing table on craigslist and a plush "Executive" chair at one of the Office stores.

At night, just sippin' a beer and reading the chair goes beside the desk...

The red headed ankle biter that lives with me seems to like that configuration... 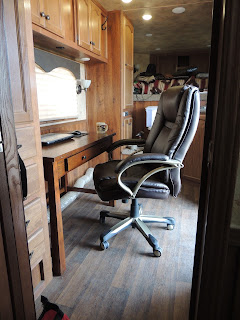 Then, in the morning or... those nights when some idea is tickling and sleep escapes... I can just swap Arlo and the chair... and tap tap tap away on the laptop...

I still have to deal with reworking the exposed heater duct but that's a small task.

The next thing I did to upgrade the living capabilities of this Lakota Rig was install solar power.

With only two batteries I still lack the capability of utilizing all the power the system produces... but the next couple of months ought to see that get corrected. 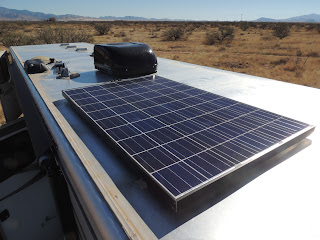 I installed a 270 watt Kyocera panel... and if you go back to the propane bottle pics you can see the electrical box I worked up to carry and protect the required solar controller unit that ships the power from the PV panel to the batteries. It's the grey box just above and to the left of of the large propane bottles.

Routing the power cables was an easy deal. I just realized I'd taken this photo just before I ran them... (I'll have to get up there and get fresh one sometime and replace this one. The cables come out from under the panel and go down through the Awning arm right there to the left middle of the picture. I drilled a couple of small holes through the gusset where power is fed to the electric awning and boom! Those lines were off the roof and run to the controller sweet and easy.

I've got other ideas and plans for shaping up a rig that works better for me... just haven't found the time or the dinero to get it all done just yet... and that next book is pestering me to get it done... so it's back to work at that fancy cowboy writing desk.