This Road That is Leading Me Home 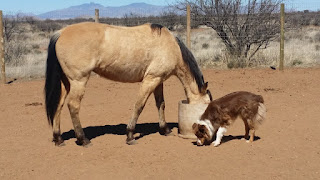 It's been 98% fine, and the 2% not so has actually been good.
Fact is it's required me to reach down for a lot of long unused memories to read this horse....Takes some time to reawaken those things!
A few days into this deal, after Cora came home we made a discovery.
There's a saying around the Ranches that the only good paint horse is a dead paint horse... For a lot of the older Riders In the Cowboy world....Mares aren't so far from that.
My Cora is pretty much an example of why. Uh Huh... she's juuuuust a mite hormonal. 😎
That's the only downside of a mare... 'cause truth be known, the fillies can out move the boys... right up until their hormones kick in once every 14 days give or take, and get in the way for the next 3 to 8 days depending on the mare.
I've had lots of mares..lucky for me most you never knew when they came in... but this gal? Not so much. Yeah, she's Captain Call's Hell Bitch... just a Buckskin. 😆
Well, I put her on some herbal stuff that's got the rep of working pretty often so we shall see. She's due to come back in now in another few days... and we'll see how it works after her being on it since her last heat.
Otherwise she's been awesome. We're doin 'bout five miles a day now. Been bringing her on real slow. Between her coming 5 in another couple months and me needing to get my own self in shape I'm not risking injury to either if I can avoid it.
Takes a horse 4 to 6 months to come close to best condition... young horses are at far greater risk of injury. Since she's old line breeding she'll tend to be a little longer maturing. The nice side of that is, if you don't get foolish they last well into their twenties.
That pretty much means this pretty girl will outlive me! :)
She don't much care for the dog... but for the most part she tolerates him. Even at lunch time.
- Brian
Posted by Brian at 5:36 PM