Arizona and Montana are Where My Heart Lives...

Whittled a project the last day before I hauled out. 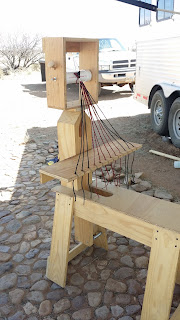 Some time back I built the first evolution of a braiding stand. Trouble with it was that it was just too bulky a set up for my cramped and limited cargo capacity.

I ended up a few months ago cutting the working bits out of it... hoping I'd come up with a better idea.

Finally, either sippin' a brew or a shot of vodka ;) I hit on an idea.

I took those working bits and whittled on them a bit to organize them in a way that they can mount up on my stitching horse to do my braiding.

Wasn't but a day or so after I done that when I up and decided that I'd ought to be goin' if I was goin'... 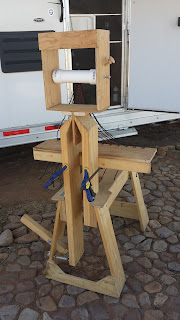 I'm not truly certain that a Missouri summer is a deal I'm ready for... Yet something inside calls for me to go and do what my Daughter might need.

We left Cochise and started rolling east bound for New Mexico and Missouri off beyon. Ambivalent about both the summer and the truck we made the first day without issue. I'd decided to run a two day run in three or four... to make the trip as easy as I could on a mare that don't care for trailer travel. That's doing a 1200 mile run in 300+- legs.

That afternoon we rolled into a "Horse Motel" in south New Mexico. I'm one for boondocking. Not paying precious cash for an overnight nap. Just a man, free on the earth... but when you've got a horse in the trailer out back, her needs override your own.

So, this trip I found a "Horse Motel" just up on the north side of Alamogordo. Turned out to be the best night of the trip... and if they were all like that one... I'd never change from it.

Surrounded by horses, and horse people taking care of their own animals... that feed their souls and give them the strength to continue on in this insane world... It was a fine and restful evening.

A soft night. A cool brew watching the New Mexico sunset sitting outside the rig on a lil' patch of grass. My mare Cora was off just a short ways in a solid and safe pipe corral. All was good.

Yeah... right up until the next morning when she'd already decided she was done with interstate travel. Took better'n two and a half hours to get her loaded back up.

Ok fine... she's in the rig and we can still make the next stop, Amarillo, a good long while before dark so off we go.

The day rolled by with little issue beyond the necessity to be on guard for them that have no ability to operate a motor vehicle and no understanding that as drivers they are a threat to all unfortunate travelers that cross their paths. In spite of the efforts of morons in 3000 pound cars attempting to defy physics and the ability of 17,000 pound plus rigs to maneuver and stop, we split the wind to a spot 75 miles west of Amarillo.

It was 'bout there that I glanced down and saw the voltage gauge telling me there was none. Or no more than 'bout maybe 10 volts. Now... knowing that it should be up better'n 14 and that the fuel pump requires juice, as well as the computer that runs the whole dang show I'm thinkin' that bein' too poor to pony up the tariff to renew that Horseman's towing service might could have been a genuine political error.

Yeah... running down the road with a pony in the back and really not wanting to spend the night on the shoulder of I-40 with not enough for both a tow bill AND a fresh alternator... that 75 mile run into the west side of Amarillo was a fun ride.

But! We made it without a burp. I got plugged in at the noisiest "Horse Motel" you could imagine that was arranged alongside an on ramp to I-40. I Won't complain though. Cora had a big pen, noisy as it was and we were off the road ok. Being plugged in juiced the batteries up so I could run the five miles to the nearest parts house - where I swapped alternators in the parking lot the next morning that was a Sunday.

But then... of course... Ms. Cora maintained her growing Hell Bitch rep. This time it only took a half hour... I learned/remembered a trick in Alamogordo that I used sooner in Texas... and we were on the road again. Late but rolling. (I had the hunger to return to Horse an rekindle my horsemanship... Ms. Cora is doing her part to make sure I've plenty of inspiration!")

Goin' down the road I decided rather than make another stop, If Cora was going to be a Diva... she could Deva along for a LONG day rather than another 300 mile haul... That would put us into Missouri late... but we'd be done rolling for a long while... So I set about to making that long haul... 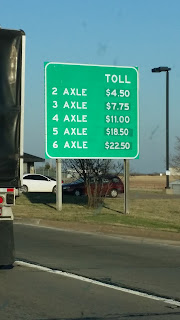 Two axles on the truck... two on the Lakota... it'll cost a fella $22 to get from Oklahoma City to the Missouri line. That's right... TWO toll sections at the rate of $11 bucks each...

Wouldn't chap my hide so much if I wasn't payin' out so much in Fuel tax, Fed excise on tires, registration fees, et al...

Oh well... it just teaches me to be more careful on route selection through Oklahoma...

This time it's the "4WD" light... now, four wheel drive should not be engaged on dry asphalt... tears stuff up... I'm road weary, beat down, cross eyed tired... and I believed the damned light.

So I slowed up, pulled off... and no matter what  I did I couldn't get the rig out of four by... and wondering how in the hell it got engaged in the first place! and it "Felt" like it was in. I swear I could feel the tugging and vibration of 4wd. Ended up running the last 75 miles or so at lowest legal interstate speed, hoping it all don't blow to hell leaving me stranded.

Made it... and two days later a "Motorhead" my kid knows looked at it and told me it's only the gear position sensor that indicates in or out of 4wd had failed... OOOOOFFFFFF... Made for a rough end of trip but Good News!

Well... been here 10 days or so... ten days of rain and mud! Lost some ground on Cora. Haven't been able to swing a leg 'cause of the mud and weather! Hoping for tomorrow...

...Felt like I needed to do something productive... so I got my Tooling muscles warmed up and started work on the first Pictorial Carving I've done in years... 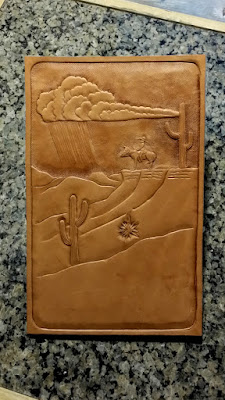 Been working the last few days between squalls to get some new critter pens and a raised bed garden built for my Missouri Daughter... and knocked out a few thousand words on a "Ben Jensen" story.

One thing the whole deal has shown me... I belong straddling a kak out on the desert... or up in the High Lonesome... struggling down the super slab dodging prius suicide drivers and forcing my Buckskin into the unnatural confines of an Aluminum box rattling down the road at 65 mph doesn't bring me the salvation it once did.

Arizona winters and Montana summers has a sweet sound...Those runs, spring and fall make sense to me, and I can deal twice a year... but two runs now I've been forced to take athletic evasive action to avoid killing morons who seem to have no knowledge of what "Yield" or "Merge" mean... or the reality of physics.

The first time it was only me. But this trip there was a horse in back. One of these idiots cause injury to one of my horses? The Sheriff will be doing an investigation... I Vow.


Now... if this cold, wet, muddy stuff will yield me some time for Cora and me to put on some Missouri miles, my grump will fade some. My task is to find the way to ride out my string... with her and any others I'm fortunate enough to roll into my string... and push -THIS- world away...

Email ThisBlogThis!Share to TwitterShare to FacebookShare to Pinterest
Labels: around the campfire, Horses, On the road with horses, writing shed