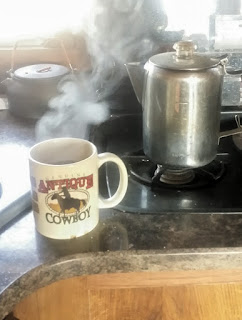 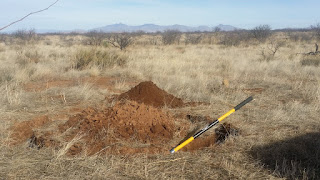 Haven't really had any tough cold nights this winter. Quite a bit of rain, but little bitter cold... even by Arizona standards.

Still, I had some difficulty gettin' the backhoe to fire up this morning. Had to use several extra ounces of starting fluid so I could get started on an outlaw cistern pedestal/tower.

Yeah... I'm an outlaw these days. Simple truth is they won't just let a man live, free on the earth, any more. They got to get "their cut"...and that just gets what few teeth I have left twisted edgewise...

I'm just minding my own business camped on my own patch of dust out on the desert... no part of no soh-sigh-uh-tee has any claim to a cut... beyond the tax I already paid just days ago for the "rent" to camp on my own dirt.

The plan with this project is to lift the cistern so gravity will let me move water into either the rig or water troughs for horses, without having to use a pump.

As for bein' Free, Hell, it's even against the law to "live" in an RV in most "jurisdictions" ... haha... I wonder if they've any idea the storm they'd stir up if/when they went to trying to enforce that lil' violation of the "Right to Life, Liberty and the Pursuit of Happiness"?

And just when was it that "inalienable Rights" got converted to regulatable privilege?

Well, enough gas, that backhoe is warmed up enough to run a mite, I think, so it's back to work!