Horses and More Pieces of the "Doin's" Around Winter Camp

Miss Cora is mostly standing in the Round Pen getting fat and wanting attention... which she gets about four times a day...


Talked to the guy yesterday that I'm gonna have top her off for me (so she and I get off on the right foot this time around). He just got back from their holiday trip, so outside of the weather I think all the blocking there is done with.

It's coming up on a year since I busted my shoulder up. I'd guess it's maybe 75% now... Gotten to where I don't pay it a lot of attention, just work with what I've got.

I'm looking forward to this fella getting her moving again in a way that'll give me greater confidence... and then she and I can get to work on building a partnership.

The new Solar System had a glitch. The controller wouldn't recognize the remote monitor... and since I don't have an address... getting the replacement shipped to the post office was a mite dicey... but got that done. 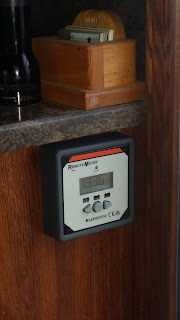 The new controller sees the monitor and it's now hummin' away with no generator grind - and I can see what's goin' on with my power plant, without having to step outside and uncover the controller!

One down and several more projects to go...

It's been a little problematical since we've been getting rather a bit more 'weather' than is terrible usual for Arizona.

But... between the Christmas snow and the rain showers... been gettin' about gettin' it done.

I picked up a new box a couple of weeks back to better organize things on the truck.

The only problem was, it didn't match the old one and I couldn't find another of those to save my liver... 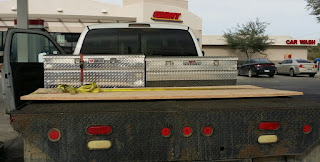 Every time I walked out and saw that mismatch it kinda poked at me...

So I hunted around and waited and Eventually Tractor supply got another in...

Those Tractor supply boxes aren't up to the quality of the Delta units... but for what I'm needing and planning, it'll do... 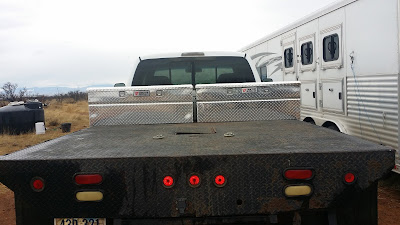 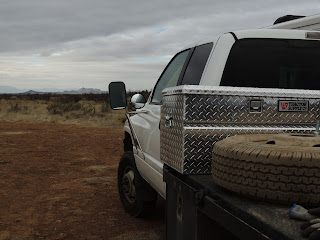 Also added the convex mirrors I got when I took off the plastic factory junk and put actual, old fashioned, functional mirrors in place.

Had to wait nearly two months for the back ordered mounts to come in... but now I have mirrors that I can actually see something in without a bunch of gymnastics.


Just before I locked down those boxes I went to work on a quick "Dog Deck" in the cab. I won't say its quality measures up to the ones I built in my other old trucks, but with no shop with all the tools I had and dodging rainstorms along the way I'll take it.

To deal with Arlo's "episodes" I still want to add one of those metal grilles they have for SUV's and such that keeps a dog restrained in the back.

I have a cable I've been using that keeps him back there - mostly - but it's not so great.

The space underneath gives a place I can stuff a coat and such away from his teeth... but to tell the truth it's already mostly filled up with boxes of leather tools and such.

If I ever do finally choose to set up in one place, it'll sure empty a lot of stuff off the rig!

With the boxes locked down on the back I'm getting to work now on relocating the spare off the truck and the spare from the trailer to the truck bed.

The idea is to open up the spaces where they were mounted for more efficient use. 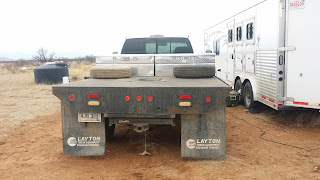 Opening up the front of the trailer gives me the spot to build and mount a battery box to double the size of my battery bank...

Which will be a welcome addition. It will allow the use of all the power available in my solar charging system.

Then under the tail... where you can still see that mickey mouse factory tire lift system hangin' there... I'd been thinking of adding a water tank under there... but once I got to fiddling with things I realized that my 35 gallon tank I've been using will squeeze in between the spared just behind the boxes if I bump the spares back a few inches.

That will allow me to, some day, mount an auxiliary fuel tank in frame. Transfer flow used to build one, though it was horrible over priced... I remember adding a tank to a Ford Pickup in the mid '70's...  think it came off a Pontiac ;-)

So... I believe it's time for a lil' more cowboy ingenuity!

Also started digging and prepping for the foundation of a Stone "Water Tower". I'll be building a "Platform" about four feet high or so.

My 550 gallon cistern will sit up on that. Then, to make sure it stays around when I'm off making a circle, I'll continue laying stone up and over the cistern.

Having it up on a pedestal like that will eliminate the need to hook up a pump (like I have to do now) to fill my rig tank. Just run the hose, open the valve and let gravity do the job.

Other little bits and pieces happening, but nothin' to talk about yet.

The book is calling for some attention so it's back to work for Me!