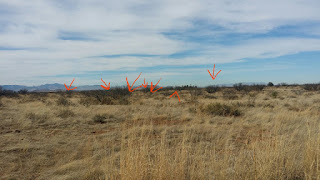 Been working inside and out. A few hours at the desk and a hunger for some strong hours outside.

A couple rainy days and one with snow stored up some impatience to get on with it.

Have done a lot of rethinking of things since I've been back. The last few days I've spent laying out the locations of a lot of the material parts of that thinking.

The first thing I did was move the entry drive location. I'd given it no good thought before. Just used the same spur-of-the-moment tracks and went with it. That would actually have some issues, so now it's in a spot that makes a little sense - at least to me.

There's a hell of a lot to do...and as always... very little treasure to do it with 😉

And then a spot is set out for a decent "barn".

Today I drug a 300' tape, some t-posts and a driver through the mesquite and cactus to lay out the rough lines of a decent arena space.

There's quite a little bit of mesquite, catclaw and a few prickly pear to grub out of that area... The arrows point out a few. 😩

No idea when these tasks and ambitions will get made available for a portrait by Google Earth... but each day will see at least some small step in that direction.

Work on the first cistern tower should commence this next week maybe... Haven't totally decided what I want for that barn... pipe or stone - so that'll have to wait on that decision (and a hell of a lot of rock poaching if I go that way!!)

Gotta get back at it.