Horses and Dogs, Batteries and Kaks,

Checked up on Cora the other day. She'd come along well enough to be hauled to work in the Stockyards a bit moving cattle. 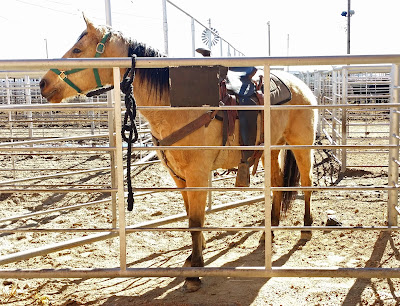 She's coming along fine... mostly. Turns out she puffed up a leg there working the cows. She's been standing in a pen for way too long. Since a year ago really... so she's soft.

Didn't go lame but one leg filled a bit. Just showing some puffiness. Exercising a bit of caution, her "training" is pulled back for a few days to make sure it remains no big deal.

Still ten days out or so I suppose. It all just stretches my impatience that much tighter.

Can't just sit around tapping on a keyboard so I got the battery box partially bolted in place. 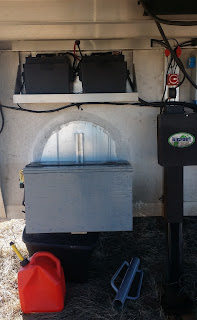 It still needs some bracing to complete the mounting... I'm planning on a couple of bars that'll reach up and attach to the rack above it. That'll stabilize a tiny bit of  'rock' I can find in the mounting.

Whether here or on the road... It's nice to seldom need to fire up the generator.

I've been running it some this past week. Between the cloudy weather and the cold nights, I've been using more power than is very comfortable for only two batteries.

Once I set two more batteries in that new box I believe I'll have sufficient stored amps to take a lot of stress off that part of the rig.


While waiting on Cora's education, and my own Physical rehab to get us in the proper place, been working on my gear a little. Decided I needed to make a small modification to my old Wade saddle. 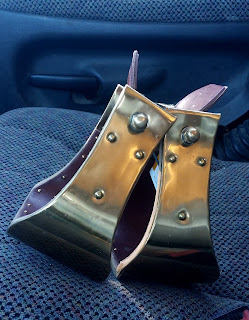 Decided I needed to make a small modification to my old Wade saddle  A nice new set of stirrups.

I've ridden Oxbow stirrups since forever... and I like 'em. On rougher colts and in rough country, they're great. Hard to lose one when things get western.

Thing is that can make 'em just a lil bit risky at times too.
If you come loose, with that stirrup locked up against your heel, a fella can sometimes get hung up in Oxbows.

So I swapped out to a flashy new set of Stirrups.  4" Brass Monel Bell style.

I expect I'll adapt pretty quick. I'm thinking the increase in comfort won't be too hard to accept...

... and what with my ambitions slowin' up... having little worry about a hangup won't be a bad thing either.

Only been able to put my feet in 'em with my kak settin' on the stitching horse... But honestly, I believe I'll like the change. 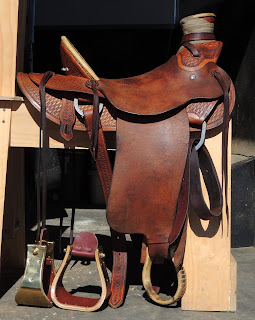 Now, If I can just get me, the dog and the horse to quit busting things__ so we can start putting some miles on together...

... and NOT miles with a truck and trailer goin' down the road...

Yesterday I guess I felt the need to reinforce the idea that Cora was maybe a little sore from working good after taking it too easy for too long.

Been slacking on my own rehab the past few weeks as I keep trying to push along with the book. The past few days I've been pushing to make up for that...

Dug and hauled several barrow loads of dirt from rat hills... to fill in and build up the pedestal for the cistern.

Then had to pack it in and tamp it down in and around that pedestal base.

uhn huh... last night I was chewin' ibuprophen like chicklets... 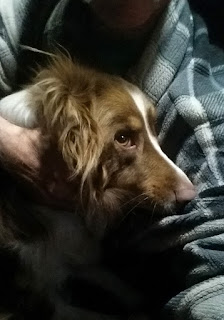 Speakin' of healing... Arlo's comin' on fine. Actually better than that. He's healing up from his lil' didoe amazing.

I figured he'd be most lame for a few weeks. He don't think so.

I've had to let him out a bit more than even I thought would be good just to keep him from goin' psychotic on me.

Here it is ten days or so since he got crunched so hard and he's down to pretty much not even a limp. He run around for several days on three legs. That foot never hit the ground. Now, he's only got a once in a while very slight limp... so that's a good thing.

He still likes to try his new found lap dog thing... for about six seconds... and then his squirming returns and I'm done with that!

Rumors of a Missouri return are already percolatin'... changes there have moved the construction schedule up that poverty had hung on a peg... so we'll see what the coming summer holds... Cora and I have GOT to put some miles together under saddle before we go anywhere!